Conjuverb Mini-Review: Good If You Want Verbs In One Place 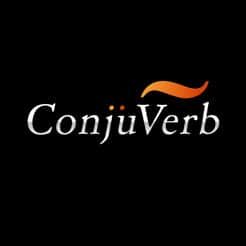 Conjuverb is a Spanish conjugation dictionary app with over 1600 fully conjugated verbs. It has a flashcard function that allows you to make custom lists or choose from pre-made decks to test your recall. Judging by their announcements, the developers seem to have a good sense of humour that may pleasantly seep into various areas of the app.

Conjuverb was a big deal in the world of Spanish apps back in 2013, but it doesn’t seem to have kept up with the resources of today — mainly because it doesn’t seem to use a Spaced Repetition System for its flashcards, but also because the information in the app is now freely accessible on SpanishDict. You can also subscribe to Brainscape for access to decks that will teach you all the verb tenses and much more.

If you don’t want to spend a lot of money but genuinely need an app that focuses entirely on verb conjugations, this would be a fine app to use. Otherwise, check out the previously mentioned resources.