Rosetta Stone and Duolingo are two of the biggest language-learning companies in the world. Rosetta Stone, having been founded in 1992, comes from an earlier generation. Duolingo, on the other hand, was started much more recently, in 2011.

Although they’re both huge companies, the way they go about teaching languages is completely different.

If I had to choose one or the other, it would 100% be Duolingo. I imagine if you asked someone my father’s age, they might say the opposite.

Truthfully, I’m not the biggest fan of either resource. Duolingo is decent enough but nothing amazing, and in most cases, there are resources I’d recommend instead.

Rosetta Stone, on the other hand, would be one of the last resources I’d choose to use to learn a language.

I can’t give one specific alternative course here simply because every language has different resources available. To see my top recommendations for any given language, I’d suggest clicking on your favorite language from the table below.

Now, let’s take a closer look at both Duolingo and Rosetta Stone, starting with Duolingo.

You can read our full review of Duolingo here.

(Our rating of Duolingo increased to 4 stars as they’ve made some improvements since this video was published.)
Although I’m not the biggest fan of Duolingo, it’s hard not to appreciate and respect what they’ve done as a company. With over 300 million users worldwide, they’ve made language learning accessible and free for people all over the world.

For English speakers alone, there are over 30 languages to choose from. This not only includes the most popular languages but also less-studied languages like Navajo or even made-up ones like Klingon.

Plus, for those who aren’t English speakers, or prefer to study from another language, there are some courses with instruction in languages besides English.

All in all, Duolingo is an impressive platform, made even more impressive by the fact that it’s completely free to use.

Duolingo organizes their courses around various skills. These are basically short mini-units that cover a certain topic, such as restaurant, family, emotions, work, and so on.

While it may seem logical to organize lessons in this manner, it doesn’t always work so well; you may be left learning fairly obscure vocabulary before some of the more essential things.

In the Spanish course, for example, you’re taught the words for two and three in the 14th skill but the word elegant shows up in the fifth skill. That doesn’t make much sense to me.

There are also some fairly short explanations of important grammar points, and if you’ve already learned some of the material, you can test out of the skill.

Most of the learning that you’ll do on Duolingo comes from completing lots of exercises rather than explicit teaching. Often, you’ll be asked to translate a sentence even before you’ve been taught any of the words. This may sound challenging, but it’s actually quite easy since you can click on any word to see its meaning.

One thing that I would consider to be a pretty big issue is that the audio of the sentences can sound quite unnatural. This is because the sentences weren’t recorded together and seem to rely on text-to-speech technology. So, while the pronunciation is mostly okay, the rhythm and intonations of the sentence don’t flow quite right.

To me, that’s a pretty big issue. When learning a new language, it’s important to mimic lots of speech, so training yourself on something that isn’t always correct isn’t ideal.

Sometimes, a lesson will begin by presenting you with a few pictures and you’ll match the word to the picture. It’s a simple enough way to be introduced to a new word, but hardly challenging.

Another issue with Duolingo is that sometimes the sentence choices don’t make much sense. There isn’t a strong focus on conversational language like you may find with other courses. This can lead to some bizarre sentences showing up. In fact, there’s even a Twitter account dedicated to it.

All in all, it’s not necessarily a big problem as the strange sentences don’t show up too often. And even when they do, they can still help you understand the language better, and if nothing else, make you laugh. Still, it can feel a bit odd learning sentences that you’ll never use in real life.

All that said, Duolingo does one thing better than any other platform. They get you to actually study every day. That’s really the most important thing. After all, the best course is the one you use.

Their lessons are so fast and easy that it can be difficult to come up with an excuse not to put in your daily study time. They reward users with streaks, experience points, badges, and more. All of which may sound silly, but can definitely stop people from skipping their lessons.

Despite the fact that there are a lot of things that I don’t love about Duolingo, it’s a pretty good resource to get started with, especially since it’s free to use.

There is a Pro plan which costs $9.99 per month, but most people wouldn’t feel the need to upgrade unless they want to support Duolingo’s mission.

You can read our full review or Rosetta Stone here.

Rosetta Stone is much older than Duolingo, having initially been released in the ’90s before going on to become a household name.

In total, it offers courses in 25 languages.

Rosetta Stone seems to operate on the premise that, since young children learn a language just from being immersed in it, without any translations or being told how the language works, you should too.

I strongly disagree with this idea. Adults are much different than children and therefore learn languages in a different manner. By trying to teach a language to an adult as if they’re a child, I think a lot of information gets lost, is poorly understood, and that learning is much less efficient in general.

As I’ve only tried the Spanish course, my opinion will come from that experience.

Throughout that course, there are over 200 hours of materials available to students to practice reading, writing, listening, speaking, and pronunciation. The lessons take longer to complete on Rosetta Stone compared to Duolingo, making it require more of a commitment from you each time you decide to study.

This material is split up into 20 units organized around certain themes, such as Tourism and Recreation or Home and Health. Each unit is more difficult than the one that came before it, and the lessons build on previous material quite well.

There is some variation as to the exact exercises found within each unit, but they all follow essentially the same format.

To begin, there’s the first core lesson which should take around 30 minutes to complete. This reviews some previous material and introduces you to the new content of this lesson. It becomes more complex as you work through it.

Following the core lesson, there are some shorter exercises that focus on individual parts of the language.

Everything you learn on Rosetta Stone is taught through the use of pictures. There’s no English to explain what something means. For much of the content, this is fine. It’s easy enough to figure out the difference between a boy and a girl from a picture. But, not everything is so obvious – what about lunch and dinner?

Some languages do include the ability to translate specific words, but this is more of an afterthought. 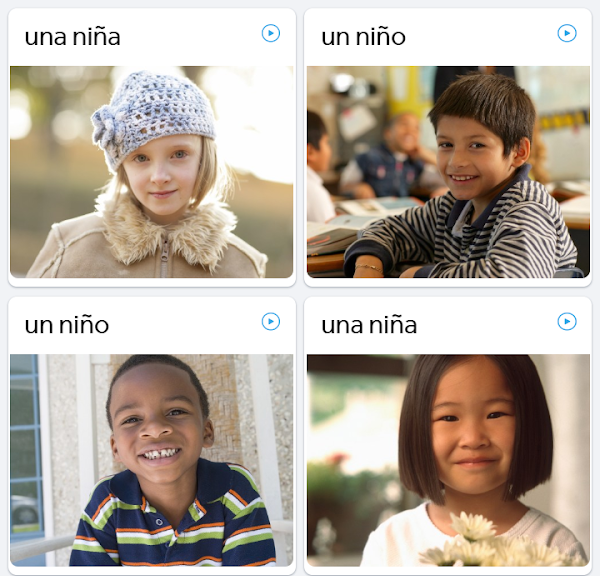 Relying only on images can be especially problematic for teaching grammar. Again, easy grammar points can be deduced this way, but much of it is too complicated. A simple explanation could save students from lots of unnecessary confusion. Basically, I think this format is awful for understanding more complex grammar points.

Making matters worse, the exercises are likely to become extremely monotonous, and I think most students would have a hard time pushing themselves to complete the course. The lessons are all some variation of matching words to pictures – whether that’s by reading, writing, listening or speaking.

I do like that Rosetta Stone uses several different voice actors in their course. This makes it easier to get accustomed to hearing different accents spoken naturally.

They also have voice recognition software, which sounds great in theory, but the technology isn’t good enough yet. Quite often it would mark things correct even if I intentionally said it wrong or wouldn’t accept correct pronunciation in other instances.

This isn’t a problem unique to Rosetta Stone. Several other language learning platforms also use voice recognition software and none of them work very well.

Rosetta Stone has stopped selling its courses on CDs, and they’ve added subscription options with prices starting at $36 for three months.

Although they do some things quite well, there are too many issues, especially when combined with the monotonous nature of their lessons, for me to recommend paying for it.

If you find a free copy, it may be worth trying. But be aware that if you find yourself losing interest in studying, that could be more of a fault of the program than anything else. In that case, don’t give up on language learning, just try a different course.

Duolingo and Rosetta Stone are the two most well-known language-learning platforms in the world. Both do some things well but fall short in many other areas.

I like that Duolingo is completely free, that they offer so many different languages, and the fact that they excel at keeping people coming back every day to study a little more. But, the poor audio quality, the awkward structure of materials, and nonsensical sentences make me hesitant to strongly recommend it (it’s still alright though).

Likewise, I like the way Rosetta Stone’s course is designed, with lessons becoming more challenging and building well on what came before. But, their decision to never explain the more challenging materials that aren’t obvious from pictures alone, the repetitive nature of their lessons, and the high cost make me recommend many other courses instead.

Not only do I like Duolingo better, but it’s also free. So, if I had to choose between Rosetta Stone or Duolingo, the choice would very clearly be Duolingo.

However, if I were starting to learn a new language, I’d rather spend a little money to get access to a better course. Even if I weren’t willing to spend any money, there are other resources I’d like to use instead of, or as a supplement to Duolingo.

While I would love to give you a recommendation right here as a better alternative to Rosetta Stone and Duolingo, it really depends on which language you’re learning. You’ll find my most-recommended resources for each language from the links in the table below.