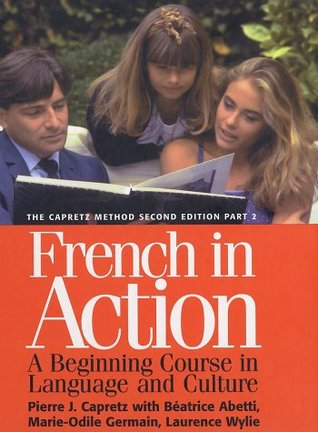 From the producers of the Spanish video series, Destinos, French in Action is an award-winning beginner French video course from the late 1980s that will train your listening comprehension and speaking abilities.

Pierre J. Capretz is both the narrator of the series and the originator of the Capretz Theory. The idea is that French is French; it’s not coded English. So, understanding French is not about making direct translations into your native language; you have to learn meaning through observation and deduction. Consequently, beginners may be overwhelmed when they first engage with the French-immersion series, but gradually they will pick up basic vocabulary as they follow along and respond to Capretz’s prompts to repeat after different characters.

Each of the fifty-two 30-minute episodes starts with a brief English explanation that gives context for the lesson. Then, you will hear a dialogue that follows the story from the previous lesson, followed by a series of interviews, movie clips, and images that illustrate keywords. Throughout the lesson, you will hear the new words pronounced before you see them written. This way you will be less likely to associate French writing with English sounds, as they have very similar scripts.

For more French immersion material, you can check out Easy French and Alice Ayel on YouTube; intermediate learners can try innerFrench and Frantastique (which is expensive, but 100% worth the free trial).