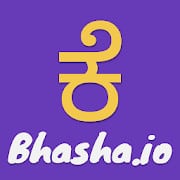 With the Kannada Alphabet app from Bhasha.io, you’ll practice pairing the Kannada character to the right transliteration. It makes heavy use of audio files.

However, it doesn’t teach you how to write the script, so you’ll need to pair it with another app such as Kannada101 or practice on your own. It could be further improved with a record yourself or speaking option.

Bear in mind that you also have to provide an email address in order to use the app.