Learn Chinese From Movies makes it easier for intermediate and advanced level students to start incorporating movies into their study routine. They add English, Simplified or Traditional Characters, and Pinyin subtitles to play over the top of various Chinese and international movies. I’ve found it to be helpful to bridge the gap between intermediate study materials and native movies.

Movies are streamed online from Youtube and other sources with subtitles added.

A decent selection of movies, but having more added would be nice.

Cheaper than other resources that use native videos to teach Chinese.

I had difficulties finding movies with both English and Chinese subtitles in the past from other places. This makes it really quick and easy.

Finding pinyin subtitles from other places is almost impossible.

Solid variety of movie titles to choose from.

The glossaries and transcripts are useless to me.

The Premium Plan is terrible value.

You have to give your payment information to access the free trial.

A Basic subscription to Learn Chinese From Movies costs $8/month or $77/year. A Premium subscription costs $297/year and the only additional benefit is that you can download the glossary and transcripts.

Save $30 on a yearly subscription by using the promo code “ALR-30$-off-yearly”.

It seems like the quality and value of Learn Chinese From Movies has gone downhill since writing this review. Many videos have been taking down, and there seem to be some other issues as well. I’d recommend checking out these free alternatives instead – CaptionPop & Captron

Get $30 off a one year subscription by using the coupon code “ALR-30$-off-yearly”.

Learn Chinese From Movies (LCFM) is a new Chinese learning resource that I’m pretty excited about. It hasn’t been around for long and has a lot of room to grow. But, even as it is now, I really like it.

As you reach the Intermediate level and higher you start to want to mix in movies and TV shows into your Mandarin Chinese study routine. However, your options for doing this aren’t particularly good. Before LCFM, you could…

* Watch kids shows and cartoons. While this is helpful and the app Bao Bei Ting Ting is great for finding these shows – it’s far from ideal. I’m not a kid. I don’t really want to watch kids cartoons.

* Subscribe to FluentU – If you’re interested in watching one minute videos that are mostly commercials and paying a relatively high price to do so – check out FluentU. I don’t like it very much – you can read my review of it here.

* Subscribe to Yabla – Yabla is similar to FluentU in that they have lots of short two minute videos. They do have quite a few multi-part videos though. So, that makes it more like you’re able to watch a full TV show and the reason I prefer it to FluentU. But still, there aren’t any movies or longer content. Read my full review of Yabla.

* Just watch a Chinese movie – This isn’t a bad option and a good challenge but you’re going to miss out on a lot of details in the process. Plus, it can be hard to find a video with captions. Much less captions that are exactly the same as the audio and where you have the choice of Simplified or Traditional characters. If you’re looking for a transcript or pinyin subtitles as well – this is going to take a lot of effort and there’s a good chance you won’t find it.

This is where Learn-Chinese-From-Movies.com comes in.

LCFM streams films from youtube and other places and puts their subtitles on top of the videos. The subtitles will show either traditional or simplified characters, pinyin and English. You can turn off the subtitles but you can’t remove just one of the options. So, if you want to remove only Pinyin, that’s not possible as far as i can tell.

They currently have 35 movies to choose from and the selection seems to be growing. The mixture of movies is pretty good as well – with a variety of genres represented. It would be really helpful if there was a difficulty rating attached to the videos but this isn’t a part of the platform right now. However, it’s pretty safe to assume that The Lion King is going to be easier than a movie set in the Tang Dynasty. 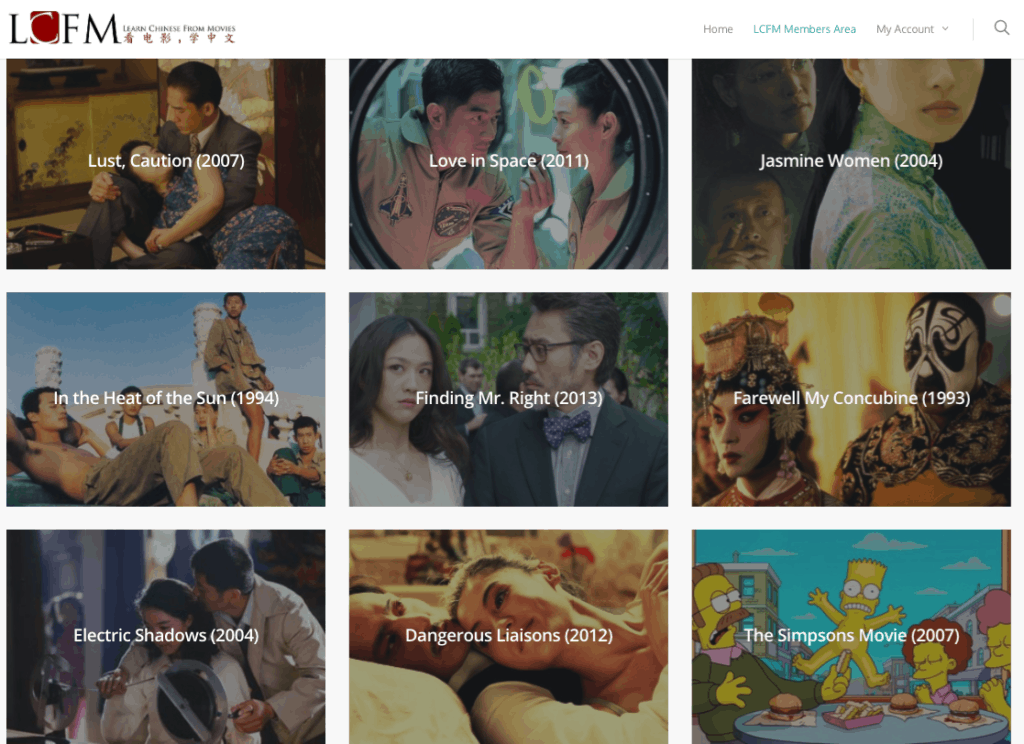 The player has worked quite well for me – even though I’m in China with a VPN and a terrible Internet connection. It’s pretty nice being able to quickly rewind the video five seconds by using the back arrow. I found myself using this a ton. It also made it easy to try to repeat the lines and get some speaking practice. One other feature though that I think is missing and would improve things significantly is a pop-up dictionary. You can see the translation of a sentence but it’d be nice to be able to look up words individually. Being able to then save these words and export them to Pleco or Anki would be awesome.

The movies also come with transcripts and glossaries but I’m not a fan of either. They’re both pretty ugly and not user-friendly. You also can’t print them out unless you pay a lot more money for a premium subscription. The way they’re formatted, you can’t use a popup dictionary extension like zhongwen for chrome to see definitions of individual words.

The glossaries are even worse though. The formatting is just not something that’s helpful to use. It’s basically just a running list of which words were used and shows the characters, pinyin and definitions. I find it really inconvenient. I’d love to see them abandon this style – perhaps integrate a popup dictionary with the transcript. Also, having the glossary separate from the videos sucks. I don’t want to be switching tabs every few seconds to see what the word means.

The transcripts and glossaries are a huge part of Learn-Chinese-From-Movies.com but I can’t ever see myself actually using them.

One small thing that I like is that for each movie, you can watch a trailer, read background info and a synopsis, and some will show the IMDB rating. This makes it easy to figure out what movie you’re in the mood to watch.

Get $30 off a one year subscription by using the coupon code “ALR-30$-off-yearly”.

The basic plan costs $8/mo or $77/year which is cheaper than both Yabla and FluentU. With the yearly coupon that price is lowered further to only $47.

The premium plan is only available as a year subscription and costs $297/year which is $24.75/mo. The only benefit in this plan is that you can print the transcripts and glossaries. This seems like a terrible deal to me and I’d never consider paying this much but I guess it’s worth it for some people.

There’s a custom plan for $127. This allows you to choose a movie and have LCFM create custom-made subtitles, transcripts, and glossaries. Again, not something I’d personally buy but this at least seems reasonable, unlike the premium plan. Actually, it might be a pretty cool gift for a significant other that’s learning Chinese.

Learn-Chinese-From-Movies.com is a new addition that Intermediate level or higher students should consider adding to their list of study materials. It has a lot of potential for improvement but I’m optimistic that they’ll refine and improve their product a bit more still. Even with its faults, I still like it quite a bit.

Save $30 on a yearly subscription by using the promo code “ALR-30$-off-yearly”. 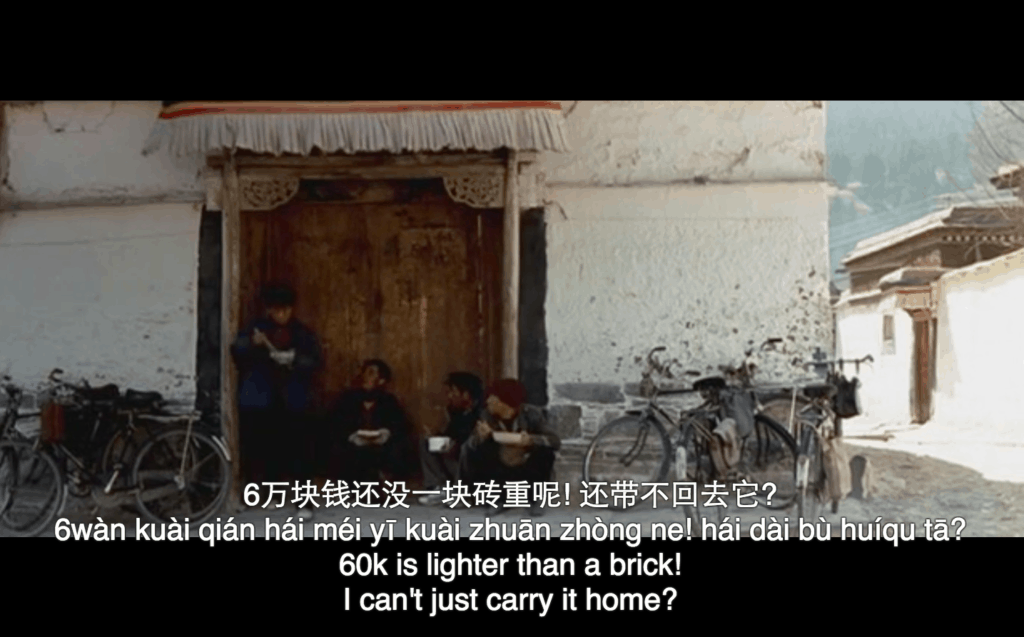 If you are thinking about purchasing LCFM, I highly recommend that YOU DO NOT PURCHASE IT.
In 2017 (the time this post was written) LCFM was decent, but this is no longer the case anymore.
This goes for at least the “Basic Yearly Membership”. I am unsure about the other memberships or purchases but I would imagine they have the same issues…

The service basically is not as advertised anymore because:

And to top it all off…

-The pinyin is NOT embedded in ANY of the movies! (which is most of the reason I purchased a membership in the first place)

So yeah I am not sure why they have not taken down their site, since what they advertise isn’t even in
the membership service anymore.

YOU HAVE BEEN WARNED.

Thanks a lot for sharing.

That’s really disappointing to see that their service has gone downhill. I just quickly checked their site and it seems like there are now about half as many movies as when I first wrote the review.

That’s weird that the pinyin isn’t embedded anymore, it was when I tried, but that was quite a while ago now.

There are some decent (and free) alternatives – CaptionPop and Captron